You are here: Home › Uncategorized › Dinner At Aunt Chee’s 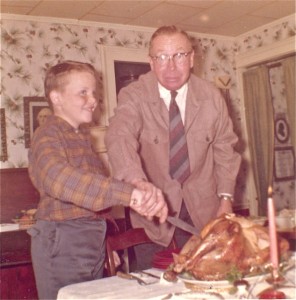 Often, the way it seems depends on who’s doing the observing. The first time this became irrefutably obvious to me was one day, years ago now, when I got two back-to-back phone calls, one from my mother, one from my Aunt Chee. I was living in Atlanta, they were both living in a small town in upstate New York. The purpose of each call was to relate to me the details of a dinner that had taken place at my aunt’s house the night before.  Present had been my parents and my brother Gary, who was visiting from California, and of course, Aunt Chee. Four people—not a madding crowd where things could only have been half-heard or misheard or missed entirely….or so one would think.

To preface the story a bit, my brother was gay. He’d come out to the family about ten years earlier, and to say that my father’s initial reaction, which lasted several years, had been explosive, would be understating it by a lot. Ever since he had somewhat calmed down, my father had struggled with “what had gone wrong” with his son and was it somehow his (my father’s) fault? He asked everyone and anyone he encountered in an attempt to find the answers. When he asked me—as he did more times than I could keep track of, “What can I do to help your brother?”  I would tell him over and over, “It’s not my brother who needs help—it’s you.” Obviously, this is not the answer he wanted because he had continued to ask me the same question repeatedly—for years.

Aunt Chee’s call came first. “Nancy, you will not believe what a wondrous miracle occurred at dinner last night! The Lord was truly present and your father and brother came to a meeting of the minds that I would never have believed possible.”  Aunt Chee was beside herself with excitement and the happiness that could only come from having hosted this world-altering event. She gushed on and on…you get the idea.

Not five minutes later, the phone rang again. It was my mother. Her tone was tragic. “Nancy, a terrible thing has happened. It was at dinner at your aunt’s house last night…I don’t know if Gary will ever come home again.”

“What?” I said, thinking that my mother must have had an out-of-body experience where she had attended a totally different dinner than the one that Aunt Chee had just rhapsodized about.

“I can’t tell you how truly horrible it was—your father, your brother…they said things to each other that were just unimaginable, and I don’t know if either of them can ever recover….I really don’t think Gary will ever come home again.”

To be clear, my mother and Aunt Chee were in fact talking about the same dinner, which each of them attended, as it turned out, as observers. They saw and heard the two principals–my father and my brother–saying the same things in the same way and at the same moment in time. The only differences were in their perceptions.

How could two people observing the exact same interaction come away with two such diametrically opposed takes on it? The answer is the title and the subject of this blog… The Way It Seems is not always—or maybe not ever–the way it is.

(In support of this premise, my father’s and Gary’s takes on the storied dinner were that nothing remarkable had taken place at all.)

7 Responses to "Dinner At Aunt Chee’s"