You are here: Home › Uncategorized › A Little or a Lot–It Depends on How You Look at It….and, Happy 4th of July! 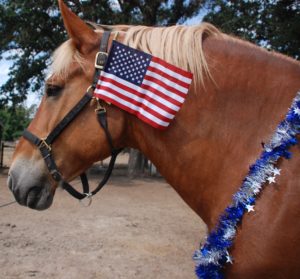 It’s the 4th of July and there are many things I could say about that, but I’ll refrain, for now. Instead, I’m changing the subject to a phone call I received a few hours ago, subsequent to a phone call I received two days ago, both from a longtime friend, en route in her car from Denver, where she’s been living for the past nine months, to outside of San Francisco where her home is. It’s a long drive and one that I know, at least major parts of it.

The first thing that came to my mind when she called the other day was how jam packed her car must be with toting her, her Labradoodle dog (size of a Standard Poodle), and all of their belongings they had been using for the past nine months. I had momentarily forgotten whom I was talking to. This friend is the queen of pared-down. She doesn’t need much, but she has what she needs and her home is well decorated (no excess) and she is well dressed (all clothes for all seasons in one small closet that is not crowded in the least). I wish I could be like her. She wishes I could be like her, and doesn’t understand why I am not. The difference? She pitches things, I save (notice I didn’t say “hoard”) them–just in case I might need them again. I digress.

Even with her minimalist style, the car had to have been full. Thinking back to stuffed station wagons hauling me and my friends off to college, where we didn’t even need to think about packing kitchen or bathroom gear. Ollie, my friend’s dog, takes up a fair amount of space at 70 pounds, and then there’s his bed.  But when I asked about the load level of the car, my friend said, “no, it’s not bad at all–just Ollie, me, his bed, an overnight bag, and a box.”  She’d sent most of her stuff on ahead via USPS, so was not overly burdened. Again, I thought how smart she was and envied her traveling-light MO. If only I could be like that.

Then she called again today, nearly home with just a couple more hours to go.  Surprisingly, to me, she’d taken the most undesirable (northern) route, straight up through Utah and across Nevada. I know it only too well, having been marooned in several places along that very long stretch three years ago when my car was dying in fits and starts. Another story.  I was sure she would have taken the southern route, going through northern Arizona, including Flagstaff, and then up the middle of California on Route 5–boring, but efficient, and not nearly as boring as crossing the entire state of Nevada.

Anyway, she’d spent last night sleeping in her car, because there in the middle of Nowhere, Nevada there was nothing closer than 100 miles than some kind of ranger station(?)<–I think that’s what she said–once she had had enough driving for the day. So, she pulled in there to spend the night. Her car is one of those with the fold-down back seat that creates a sort of station wagon/SUV kind of space.  Plenty of room for her and Ollie to stretch out, or so I thought.

“But I have so much stuff in this car, there was no room,” she said.

“What? No room? I thought you only had a couple of things in addition to you and Ollie?,” I said.

“Well, there’s his bed, and my clothes (presumably the formerly reported overnight bag), this big box, and all this other stuff.”

“What other stuff? You didn’t mention any ‘other stuff’ the other day.”

“Well, I don’t know, but there’s so much stuff I couldn’t even recline the seat all the way back, and since Ollie was on his bed, there wasn’t a bed in the back for me anyway, and even if there had been, there wasn’t any room.”

Was I talking to the same person from 2 days ago–the one with “not much” in her car, making this move sound so simple and easy?  Maybe it was the lack of sleep from having spent the night in the car, but what had seemed to be so little just 48 hours ago had suddenly turned into a whole lot more. How did that happen?