You are here: Home › Uncategorized › The Beauty of the Word Is in the Ear of the Beholder 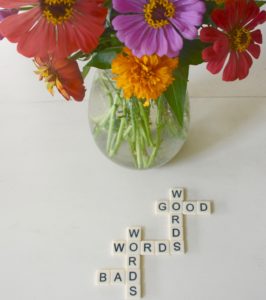 A fellow blogger recently posted a piece based on the word “cute”–she hates it.  It’s a pet peeve word with her, apparently–one that she does not want to hear unless it applies to toddlers or puppies, she says. She particularly doesn’t like the word if it’s applied in any way to her or her husband–or, specifically a particular picture of her with her husband, both looking hail, hearty, happy and against what looks like a western U.S. wilderness background–they, presumably, just back from a hike. Some friend of hers had emailed her a one-word response to the photo, and the word was “cute.” She was not happy, although she recognized the intent as positive.

I have words like that that I dislike…let’s see, where should I begin?  First word that comes to mind is “yummy.” Don’t ask me why, but I do not like that word–it sounds “forced juvenile,” assuming it’s being spoken/written by an adult. Continuing with food words, “tasty” also ranks near the top of my Do Not Like List, I don’t know why about this one either–I just don’t like the sound of it. Perhaps it’s because  it conjures up images of someone smacking their lips–most distasteful. I’d rather that the person labeling something with that word would find something more specific to say–like it was “wonderfully and highly spiced,” or, it was “not too sweet and had a hint of almond.”  More words in each case, but at least I have a better idea of what the taste was. Or, it could just be said that whatever-it-was, was just “so good.” Easy, simple, tasteful–not “tasty.”

“Fabulous” is another one I don’t like–it sounds so over-the-top pretentious somehow. I know this must be me because a lot of people use this word and obviously don’t have this problem with it. Words, like clothes or hair styles, are a matter of taste, not to be confused with the food references above.

“Easy-peasy” for some reason triggers a strong dislike in my brain too. Again, I don’t know why, I just know that I don’t like it–and it’s not even a real word, just a made up combo made to rhyme with itself–maybe that’s the problem.

One verb phrase phrase that has always made me cringe is “to do so”–you know, as in, “when she was asked to do so, she refused,” referring to some specific task or deed that had previously been named. Again, it sounds somehow pretentious–is it me again? I prefer to say “to do that,” because obviously, each phrase (to so so and to do that) requires that something has already been established as the action being referenced. So, in my example it would be, “when she was asked to do that, she refused.” Ever so much better and much less (no) ostentatious(ness).

Another verb phrase that I will never use for similar reasons that I will never use “to do so,” is “to come to fruition.”  I think it’s partly because I associate that phrase with someone I knew about 20 years ago who used this phrase way too much. Once in a lifetime would maybe be okay, but she used it in casual conversations as if it were the phrase flavor of the month. It sounded so out of place and as if she were trying to pepper her everyday talk with business-y sophistication. The desired affect was lost on me, if that was in fact what it was, and to me it just made this person sound put-on, and therefore, silly.

Maybe I should add some “good” words–words that I like, and to tell you the truth, those are harder to think of–I seem to obsess on the ones that have a negative impact on me. That can’t be good. The words that first come to mind as words that I like, I know the reason I like them is because of the images they conjure up–like, sparkling, scintillating, serendipity. Do I have a thing for the letter ‘s?’

I like words that sound like what they mean or refer to–like click, clack, crackle, cackle, crinkle, quack, pop. There are tons of them  The name for this kind of word-with-sound-effects is one I also like–onomatopoeia, although I can’t remember the last time I used it or heard it used, prior to writing about it here–it’s fun to say.

An Atlanta author whose books I read in the 1980s when I was new to Atlanta, seemed to have a favorite word that appeared over and over in her work–multiple times in the same book, which was a bit of a distraction because I found myself skimming each new page for that word before I began to read. The word was ‘ersatz.’  Again, a bit over-the-top for me, especially after the second use of it.

Writing this, I know that the way these words seem to me may not be at all the way they seem to anyone else–that’s the point. Nothing is absolute, even if it can sometimes seem that way.