You are here: Home › Uncategorized › The Way It Was Supposed to Seem? 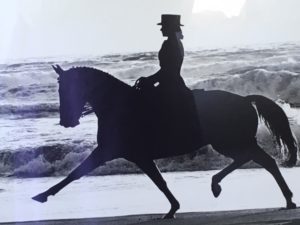 It happened last week in Rio at the Olympic Games–the Equestrian Dressage competition, to be exact. A Dutch rider withdrew, just a couple of minutes into her ride…and then the drama began, or more accurately, became an event in itself.

For the uninitiated, “dressage” as applied to horses refers to the particular discipline where horses perform various movements and gaits with seemingly invisible cues from the rider, who appears to the casual observer to be motionless on the horse. Dressage horses are sometimes referred to as the ballet dancers of the horse world–think Vienna’s Spanish Riding School.

In recent years, the world of dressage has been in conflict over “correct” head positioning of the horse and the methods used to train for that position. Looking at the picture attached to this piece, the horse’s head is in what is called the vertical position, because his head from ears to nostrils is in a straight vertical line, perpendicular to the ground. For a long time this was considered the ideal, or the limit of the ideal, position–at the vertical or just in front of it, NEVER behind it–ever. Most unfortunately for the horse, things have changed, and now the seemingly favored style is to go behind the vertical–highly unnatural for the horse, as well as uncomfortable and basically senseless because with the chin tucked into the chest, the horse can’t even see where it’s going and breathing becomes difficult. Leave it to humans to come up with the absurd.

It gets worse. The training “method” used to get the horse contorted into this chin-to-chest position is called Rollkur. At best it is highly controversial, but more accurately, it is extremely abusive, causing the horse great pain, starting in the mouth with the rider’s hands holding the bit so tightly that the horse over-bends its neck in an attempt to get away from the pain caused by the bit and often, the harsh, too low, and too tight noseband on the bridle. This then causes additional pain in the horse’s neck from having to over-flex it for prolonged periods of time. Although Rollkur is not officially allowed by the international organization that supposedly oversees these things (FEI), it is seen at the highest levels of dressage competitions. For reasons that are inexplicable to anyone with a functioning brain, the behind-the-vertical position is seen as “desirable,” and horses that achieve it are considered “valuable” in monetary terms…and there you have it. The bottom line is always money, but the question remains as to why this position is considered in any way desirable–it looks ridiculous, in addition to causing pain and other adverse effects for the horse.

It is shocking to realize that some of the highest level—read Olympic–riders use Rollkur. They can’t love their horses if they subject them to this cruel and inhumane treatment. Maybe some of them don’t claim to love their horses–which doesn’t make the Rollkur practice any better, but it at least doesn’t label them as hypocrites and liars on top of being abusers. And this is where this current Olympic story begins–a Dutch rider who claims to LOVE her horse so much that she withdrew, just a couple of minutes into her dressage ride at the Rio Olympics, because she wanted to “save” her horse.

Social media, Facebook in particular, lit up with accolades and praise for this woman who had–seemingly–“put her horse first” over her own ambitions and those of her team members who were counting on her to deliver a performance that would put them all in the medals–a big deal for sure.

Rumors started flying about how only a few days earlier the horse had been bitten by some kind of exotic insect that had caused his face to swell and his temperature to rise to fever level. He was treated and proclaimed “well’ by the day of the competition. He entered the ring with his tongue hanging out of the side of his mouth–never a good sign for any horse, but particularly not for this horse who never, under normal circumstances, does this with his tongue. Some reported seeing blood in the foam frothing from his mouth. (That he was literally foaming at the mouth was not a good sign in any event.) To some observers, the horse appeared “not well.” So when the rider withdrew, praise was heaped upon her–but was what appeared to many to be a magnanimous action on her part (to put her horse ahead of her ambitions), maybe wasn’t quite the way it seemed. If she truly loved and cared for this horse–and not just what he could do in terms of performance for her, she would not use Rollkur in any way, and she would not ride a horse into a competition that was foaming at the mouth with his tongue hanging out.  Some reports are that the horse still had a fever as well, (Where were the vets that were supposed to catch things like this?)

Another rumor bantered about was that the horse had a hairline fracture of the jaw and that’s why the rider withdrew (how would she know that sitting on top of the horse without a radiograph to refer to?). As far as I know, it has not been officially clarified as to what the exact problem was–a bug bite or a fractured jaw. One thing that is known, and is for certain, is that the rider in question is known as the Rollkur Queen and has been photographed for years using Rollkur to abuse this same poor horse. If Rollkur is officially not allowed, then what is she doing riding in the Olympics? (Same could be asked about her Dutch teammates who are rumored/known to use Rollkur on their horses too.)

This horse has been retired following this withdrawal in Rio. I cannot laud anyone for a supposedly unselfish act when I know that the MO is and always has been abuse.

So, was the withdrawal a planned theatrical event or cheap PR trick to get people to think this rider is “so wonderful?” If so, it seems to have worked with untold numbers, including some amateur (not professional that I know of) horse types as well as the general non-horse type public. What jumps out at me in this controversy is that although a number of people with inside information have spoken out against this rider, her general treatment of her horse over the years, and the specific act of appearing in the Rio ring only to withdraw a couple of minutes later, no one–again, that I know of–with access to the inner circles, has spoken out in her defense. To me this says a lot–or should I say, everything?

The way it seemed–or was (perhaps) made to seem–was not necessarily the way it was.

2 Responses to "The Way It Was Supposed to Seem?"