You are here: Home › Uncategorized › How the Way It Seems Can Quickly Do a 180 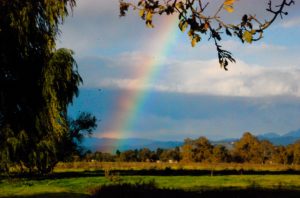 Just when you think your life is playing out perfectly and the future is bright, all can be lost in an instant and that bright future turned into a murky haze of nothingness…and then, almost as quickly–at least in the big picture, the converse.

Two people I know/know of, one a man, the other a woman, had that happen to them just over a year ago. These two are not related and don’t even know of the other, but their scenarios are so similar, I couldn’t help but notice the parallels.

Each of these two were, respectively, engaged to the loves of their lives and their love was fully reciprocated by the objects of their affections.

The man was about to start his seventh and final year of a neurosurgery residency. He was the best and brightest of his fellow residents. His future was assured at pretty much any location in the country he chose. His  fiancé was flexible and willing to relocate to anywhere. These were two of the nicest and most loving guys you would ever want to meet–and that love was not only extended to each other, but to all who were their friends, as well as to strangers who happened to be in need of some help. A perfect pair. None of us, their friends, could wait for the giant wedding that was planned to take place in New York City in the fall of 2016.

In the second story, the woman was engaged to her longtime love and partner, both of them sharing a passion for horses, polo, the outdoors, and the competitive life. Her partner was a professional polo player, and she actively participated with the care and training of his string of polo ponies and accompanied him as his head groom on trips around the country where he and his ponies went to play. They bought a small farm in South Carolina from which they based their polo business. They were the perfect couple living the perfect life.

First, the man’s (the neurosurgeon’s) world shattered when his fiancé was diagnosed with pancreatic cancer, almost always a death sentence. And, as it turned out, this particular case was of the worst and most aggressive sort. Six weeks after being diagnosed, the neurosurgeon lost his love to this dread disease.  All his plans for the glorious future he was going to share with the love of his life vaporized.  I flew to attend the memorial service and met this man for the first time in person–my connection had been to his fiancé. It was heartbreaking to see his heart in its fractured state, although he bravely rallied, and with the help of his friends, his work, and his fellow neurosurgery residents, he returned to his life after a month’s break and soldiered on through the continuing pain of loss.

About five months after the shattering of this man’s life, the woman–totally unrelated to him in any way–had the same thing happen to hers, just in different circumstances. She and her polo playing partner were traveling, on the road in Ohio, she following him, his dog, and his ten horses in a super-sized van. Disaster struck when his truck clipped the car in front during an effort to go around when the car had suddenly slowed. The polo player, his dog, and three of his horses died at the scene–the other seven horses survived with varying degrees of injury. The woman was the first on the scene. I cannot begin to imagine the horror of what she saw. In a flash, her life was in flames, and she had witnessed it first hand. How could anyone survive this?

Now, eighteen and thirteen months later, respectively, both the surviving partners of these stories have found new lives and new happinesses, seemingly against all odds.

The man, the neurosurgeon, has completed his residency in Philadelphia and has accepted a position in Duluth, Minnesota, where he will move following a two month trip around the world.  And, the best news is that he has found a new love to whom he has just become engaged. Who would have thought things could do a complete about face in such a short time?  Restores one’s faith in infinite possibilities.

The woman has moved from South Carolina to New Mexico, has also changed her career from polo to art sales, has changed her hobbies, and has a whole new group of friends, while still keeping the ones from her previous life. Quite a feat to have overcome that horrific tragedy and succcessfully started off in a whole new direction.

Who could have guessed that what had to have seemed like fatally doomed lives following irreplaceable losses, could turn out as it has in each of these cases, and in relatively short time frames, for these two survivors?  Proof again that the way it seems is not always the way it is.