You are here: Home › Uncategorized › A Hygge State of Mind 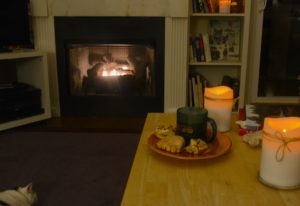 Hygge. A word I’ve been seeing more and more and didn’t know what it was until I heard an NPR program devoted to it and what it means, where it comes from, why it’s good, and how to get it. First, the pronunciation: “hue-geh.” If you want a more detailed and audio description of its pronunciation, go here and get to where the guy in front of a fireplace is talking: https://www.youtube.com/watch?v=yg9pksG_lsU

Apparently, there’s a hygge craze going on. I didn’t know. To be fair, apparently this has been more the rage in Europe, particularly Britain, although it is of Danish origin, and has not made a full-scale landing in the U.S.–yet. But it’s coming.  And now that I know what it is, I realize I’ve been into my own hygge craze for some time now–it’s what I aim for every day, and usually manage to attain it.

So, according to the NPR report ( http://www.wbur.org/onpoint/2017/01/13/hygge-denmark-winter-happiness ), hygge is a state of mind that involves candlelight, fires, knitted socks, porridge (do Americans even know what porridge is?), cake, coffee, board games, things made of wood, other people–friends only, no strangers. It would be more accurate to say that these elements set the stage for hygge rather than comprise it. Now that I understand the basic concept, I would venture that this list doesn’t need to be adhered to strictly, but the atmosphere that they create is the goal to delivering this desired state of mind. At the beginning of the NPR piece, hygge is described as “finding happiness when the days are dark and cold,” and heaven knows we are in the midst of some very dark and cold days here in the U.S., especially this week as we await what could be our doom, as well as that of the planet, if the national event scheduled for the end of the week (1/20/17) actually takes place. I digress.

Hygge is reportedly enhanced by a physical storm raging outside–I get this. Hard to feel hygge if it’s all bright and sunshiny, and this I know from my transition from being a full-out sun worshipper in the first two-thirds of my life, to an aficionado of cloudy skies and gray days, especially with some wind or rain thrown in. I’ve been wondering what has prompted this transformation of myself, and now I know. It’s the quest for hygge. Some people use “coziness” as an English word that best defines hygge, and that is definitely a large part of it. It also means feeling safe and secure–like you might when snuggled under a warm comforter either in bed or on the couch when it’s, again, “dark and cold” outside.

The NPR program contributors emphasized the necessity of having other people, who are also friends, around in order to achieve hygge. Here is where I might depart from the original prescription, unless we are allowed to count four-legged friends. I have no problem invoking hygge with no other two-legged friends involved, but it would not be possible without at least one four-legged present–and preferably more than just one.  I can also replace porridge with pizza and still find hygge. “Cake” from the original list can mean anything sweet–preferably baked–but I could find hygge with ice cream too. Tea can be substituted for coffee, but I don’t think that beer, most hard liquor, or soft drinks would do (don’t ask me why, but they don’t seem to fit somehow). Wine, maybe–it has a different feeling than beer, other alcohol, or sodas. It’s probably an individual thing.

My craving for hygge takes precedence over most social events and gatherings. Most of the time, I’d rather hunker down and incite some hygge than go out on the town and surround myself with activity and idle chatter. For me, socializing is best when it’s one on one, or maybe in a small group of three or four, but even then, the more people there are, the more elusive hygge becomes–again, for me.  It’s a fairly handy craving to have, this craving for hygge. It means I can be more than content to happily avoid the madding crowds and find my contentment from within–most of the time.

I’m just glad to have a name put to what I’ve been seeking and finding these past several years. Thank you to the Danes for naming what the world needs now more than ever, and especially in this week and in those that follow.

(Note the hygge elements in the photo–fireplace, candles, coffee, cake, wooden coffee table, a friend–of the four legged sort in the lower left corner, and knitted socks, although not visible because they were on my feet.)

2 Responses to "A Hygge State of Mind"