You are here: Home › Uncategorized › An Uncommon Communication 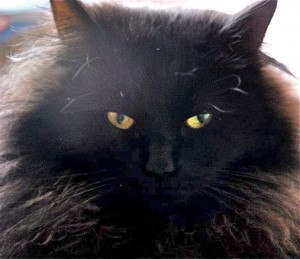 It seems I have successfully communicated with a most unlikely being–a lizard. This is unlikely not only because I don’t particularly like lizards, but because in all normal situations I wouldn’t necessarily choose to engage one in conversation. But this lizard was in my house, brought there undoubtedly by my cat Kalinda who loves to bring her catches inside and release them. I don’t know why and I have tried many times to communicate with her about this, but have obviously and miserably failed to get my point across because she keeps doing it. (Maybe she’s just stubborn and stuck in her ways.) Usually she brings in mice from the garage via a cat door between the garage and the kitchen. This time I think the lizard must have been brought in from the back patio/porch, the sliding glass door to which I leave open to cat traffic during the days when I’m gone, and when it’s warm enough. I may have to rethink this policy.

I became aware of the lizard’s presence when I found Kalinda transfixed by something under or behind my desk. this was the sure-fire tip off that she had brought her entertainment inside. I was hoping for a mouse (I know how to catch those and send them on their merry way), but this time it turned out to be a lizard who resisted my attempts to lure him into the mouse transport vessel I had close at hand. He disappeared farther into the depths under and behind my desk. I barricaded (or so I thought) his exit points from his position and made it so that his only alternative out was to go into one of the little transparent, but dark green, plastic mouse houses, the door of which would close behind him so he could then be airlifted back to where he’d come from. (I’d had an earlier success story with this method a few days ago when Kalinda’s lizard-of-the-day had made its way to under the refrigerator.)  However, this time this guy (or girl) did not go along with the program. At some point I had to concede that the lizard had escaped the theoretically confined area–I just hoped it hadn’t taken up lodging in any of my shoes.

And then, yesterday as I sat at my writing table–trying to get something written–I pushed back in my chair to retrieve something that had fallen from the table to the floor…and then I saw that the lizard was back.  EEEK!  But I didn’t say “Eeek!”, I just said, “hello”–calmly, and asked if I could be of help to get him–or her–safely to the outside. The lizard didn’t move, for which I was grateful. I think it’s partly their rapid dashes from point A to point B that freak me out as much as anything.

I continued to talk quietly and in what I hoped was being interpreted as a soothing voice–assuring the lizard that it had nothing to fear and that I was there to help. Fortunately, I had the little plastic container from Trader Joe’s that I use in this kind of situation, complete with its plastic lid, close at hand. Slowly, while explaining to the lizard what I was doing, I put the container on its side so that the lizard could, theoretically, walk into it.  What were chances?  Slim–very slim at best, I knew.

As I kept talking, I slowly slid the container closer and closer to where the lizard waited.  (With apologies to lizards everywhere, I have no way of telling the gender of a lizard, and I honestly couldn’t care less, but for the purpose of this story, I will just refer to this lizard as a he.)

He had not moved since the communication began. When the container was within a few inches of him, I dared not push my luck any further and backed off a bit, still talking and encouraging him to go into the little plastic box. He did!  And still talking, I clapped the lid over the container’s opening in case my lizard friend suddenly had second thoughts on where he had just placed himself, and off we went to the back porch. I took off the container’s lid at a place where the lizard would have a tangle of jasmine vines in which to find refuge–this being outside of the cats’ fenced recreation area.

It took my friend a few seconds to understand that he was now free, and after finally stepping out of the box, he remained–seemingly frozen in place. I began to fear that Kalinda had had maybe wounded him in ways I couldn’t see, so to test that theory, I used the stem of a leaf to touch the little guy to see if there would be a reaction. I hoped he could still move. He could!  And off he went scurrying into the jasmine jungle. What a relief for us both!

So, did I actually communicate with this lizard? It would sure seem so. I would never have expected a lizard to follow voice commands–even though they were given very softly and gently. But this guy appeared to have listened, understood, and used his free will to comply. I was most impressed.

(No time to get a pic of the lizard, so Kalinda agreed to pose in his stead.)