You are here: Home › Uncategorized › Obsession 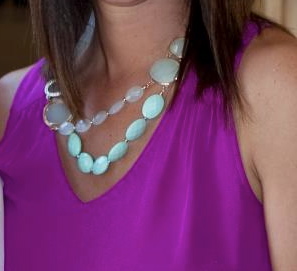 It seemed so innocent. A Facebook picture of a friend on Mother’s Day. The picture was beautiful–my friend is beautiful, and the necklace she was wearing looked so beautiful on her.  I became obsessed with the necklace. So, I emailed my friend to see if she had found it recently, and if so, where…and would I need to rob a bank if I were to buy one like it? She wrote right back.

The good news was, she had only bought it the previous week, it was very reasonably priced (no bank robbery necessary), and she could check at the boutique where she’d bought it to see if there were another one she could send to me. That was really great–and so nice of her to offer, but I really didn’t want her to go out of her way on my account, so, I got the name of the store and called them. Bad news: no more of that necklace. Good news: the store is in a chain that stretches across the country–maybe one of the shops nearer to me had it in stock. I found their website, the list of their locations, and started calling.

The story starts to get boring about here because the calling went on forever with no luck at any of the  ten or so shops I called. Finally, one person at one of them offered to put out an APB through the store’s network–an email with this picture of the necklace that would go to all the other 400+ stores in the country. Very good news!  My contact info was included, so if any stores had it, they could call me directly. One store did. It was in the middle of Oklahoma.  Oklahoma???  They left me a voice mail–I called them back, and yes they would ship it right out. Success!

Turns out it was thanks to one of the people that I had talked to in a Colorado store who had personally called this store in Oklahoma as she used to work there, and she had a hunch they would have it, and they did.  Without her call, I would never have connected with the one seemingly last necklace of my obsession left on the planet, because none of the 400 stores that had received just the email responded. I owe her.

So, the necklace is on its way and I’m already planning outfits…actually, I was doing that before I knew I could even get it. In the course of the planning, it occurred to me how cool it would be to have turquoise cowboy boots to wear with it. I’m a professional when it comes to goose chases, as I’ve mentioned in another post, so with one chase just completed, I was hot for the next–and here it was–the hunt for turquoise cowboy boots was on.

So, I then  found THE perfect ones without too much trouble–online, of course. They cost about 10 times as much as the necklace. I keep trying to come to my senses, but then I keep thinking of all those outfits I could wear them—and the necklace–with.  Only problem…I never go anywhere.  I’m so happy staying home, so where exactly do I think I’m going to wear this stuff? To Trader Joe’s? To see my horse?? Maybe I should plan a western theme party, or… I can dress up for the cats and parade around in between sessions at the computer??? Oh yes, and while searching for the turquoise boots, I found some to-die-for purple ones.  Happily, they are a third the price of the turquoise ones, but added together with them (if I get both pairs), this necklace is ending up costing me a fortune!  HELP!!!!  Oh yes—one other small thing…I don’t usually, at least up until now, even wear cowboy boots…so what the heck am I doing here? I could be losing it. And to think it seemed so benign and innocent at the outset… Someone please call 911.

(P.S. Two weeks later and I have sufficiently recovered my sanity to not have ordered the turquoise cowboy boots…I did succumb to ordering the purple ones though, but then sent them back as soon as they arrived. There is hope.)