You are here: Home › Uncategorized › Saliva?! 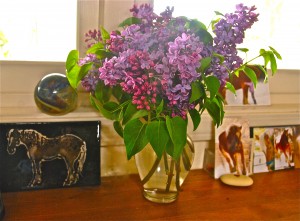 (The photo that appears with this piece was chosen precisely because it has absolutely nothing to do with the subject under investigation.)

The subject was saliva. Ick. Mary Roach, who was being interviewed on today’s Fresh Air program on NPR, admits that saliva is something we don’t like to think or talk about–especially someone else’s. It seems that as unsavory we find saliva to talk about, it’s essential to our survival in terms of its role in our digestive tracts. Mary has written a book called Gulp in which she talks a lot about saliva, along with other digestive tract-related subjects. I have to agree with Mary about the ick-factor of saliva, especially when it’s ejected from someone else’s mouth in the act we more commonly refer to as spitting. And that is leading to my key question here: why do men spit and women don’t?  I’ve always wondered.

It seems to cross cultural boundaries as I’ve observed this in Europe as well as here in the U.S. I think I’m safe in saying it goes on in Latin and South America too, as well as in Australia, New Zealand, and other offshoots of the once European Empire. I can’t speak about what happens in Asian countries, although I should ask some of my Asian friends. But for now, back to the western world.

What on earth happens in a man’s mouth that seemingly overcomes him at some point as he’s walking down the street or driving down the street in a car when he suddenly just has to spit? I don’t get it.  I’ve never had that urge unless, of course, I’ve just taken a bite of something laced with cilantro or olives, but in the cases of the men I’m talking about, they have not put anything into their mouths within at least a minute before letting fly.  Is this some sort of masculine ritual? Does this prove or strengthen a man’s sense of manhood? As a woman, when I see a man spit, I know instantly I want absolutely nothing, ever, to do with him–can’t emphasize the “ever” too much.  I mean, it’s barbaric. What in the world are men thinking?

I heard a discourse on the subject of spitting once–again, it was on the radio, probably NPR again, which is where you will occasionally pick up all kinds of gems like this. According to the discussion that day, spitting as a pastime–at least in this country–came from baseball. Baseball?  I don’t watch baseball–and if there’s spitting involved, that explains that–but why spitting and baseball?  I think they said it is supposed to improve the batter’s grip on the bat, or the pitcher’s grip on the ball?  Well, at least that would be spitting with a purpose–a slimy one, but a purpose.  Or, was it that spitting was to get rid of the tobacco juice (DOUBLE ICK!!!) that had accumulated in the player’s/spitter’s mouth (since seemingly all baseball players chew tobacco?), and of course he wouldn’t want to choke on that, would he?  And then in some twisted way, this became a sign of masculinity??  Oh my–things have gotten a whole lot worse if this is true–that men equate spitting with appearing “manly.”  But this doesn’t explain where the Europeans picked up this nasty little habit. They don’t play baseball.

So, back to the theory that this seeming need to spit is a male affliction. I really should get a copy of Gulp to see if Mary gets into this particular aspect of saliva and its role in society. Her point in the book is saliva’s role in our bodies, but maybe she takes it outside the body too. I really do want to know why it is that men seem to have this need to spit and what can be done to convince them that there really is no need–it’s all in their heads–I think.  I really hope that the reason men spit is not the way it seems. Ideas, anyone?