You are here: Home › Uncategorized › The Twilight Zone? 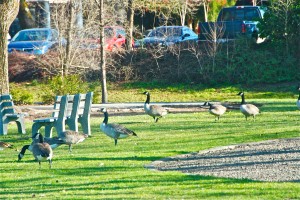 It seemed so simple. All I had to do was sign 35 pieces of paper, have five of them notarized, overnight them via Fed Ex, using the label that had been sent in an email.  Papers signed and notarized, I set sail for Fed Ex. First mistake: I followed the vague directions of the notary about Fed Ex’s location. It sounded like it would be in plain sight. It wasn’t. So, I cruised the area, expecting a prominent Fed Ex sign to pop up somewhere–I knew I was in the designated neighborhood.

Then I got smart, I thought, and used my smart phone to google Fed Ex and find out exactly where they were. That seemed to work.  There was the Fed Ex office pointed out on a google map, complete with an address of 414 Airway Blvd. Perfect. I was nearly there–or so it seemed. Off I went in search of. No phone was listed.

The google map and the 414 address did not exactly match up, but I did succeed in locating 414 Airway Blvd.  The entire area was a sprawling and convoluted office park, with mostly large modern office/warehouse type buildings. 414 Airway Drive was an anomaly. It was one of four two-story house-like looking buildings that looked like they could be cottages on a lake in New Hampshire, and in fact they were set at the end of a small pond that was in a park of walking paths. Still no Fed Ex sign…and, no sign of  Fed Ex. Before making what seemed that it would be a fruitless trip to the front door of house/building #414, I thought of calling Fed Ex, which I then did.

Knowing that Fed Ex seemingly considers itself the seat of the witness protection program, and so is very secretive about its locations’ phone numbers, I called a local print shop with Fed Ex connections to get the phone for the Fed Ex hub I was theoretically near but couldn’t find.  They knew there was one out there in the general location where I was looking, but of course they didn’t know exactly where–and they had no address and no phone for the place. They suggested, of course, that I call Fed Ex’s 800 number in Tennessee to find a location that was possibly within walking distance of where I sat in my car in front of 414 Airway Blvd, Santa Rosa, CA.

Wasting my time while attempting to get a person on that Fed Ex 800 number was what I had been trying to avoid by calling locally. The automated string of choices I was forced to make was not letting me get any closer to my goal of a live person, but was giving me automated information about a Pack & Ship location about five miles away that allegedly also dealt with Fed Ex. Not helpful. I knew they wouldn’t have the secret address or number of the elusive Fed Ex hub that I so needed to find. Somehow, and I have no idea how exactly, but God intervened. Suddenly, without warning, I was talking to a seemingly live person in Tennessee. He understood the problem, but of course, he could not give me the number of the hub either–Top Secret, you know. BUT, at least he connected me to this phantom hub and I actually spoke to a woman who claimed to be right there in it.  She gave me directions on how to proceed to her location–and it was within a longish-walk of 414 Airway Blvd., but on a completely different street and with a completely different street number.

When I arrived at the newly appointed location, there it was–the long-hoped for Fed Ex sign, very discretely displayed for anyone passing by with a magnifying glass.  Not surprisingly, the parking lot to the quite large building was empty–how could it not be?  No one knows how to find this place, or that it even exists.

Inside was the body attached to the voice I’d just spoken to from my car. She seemed astonished that no one seemingly knew of her whereabouts–except the guy in Tennessee. I asked if she thought we were in the Twilight Zone–it sure was feeling that way to me.  She didn’t think we were, but then she would have been the last to know. I was wondering if I would be able to escape what I had worked so hard to find. It was all a bit too creepy for me. Nevertheless, I dropped off my 35 pages to be overnighted, trusting the fates to get them to their destination more efficiently than they had gotten me to mine. The odds were not good–they were traveling 2500 miles and look how problematic it had been for me to travel five.

I’m known for going on goose chases, some of my choosing.  This one was not, but I knew I was on one for sure when I sat there in my car at 414 Airport Blvd., looked up from my phone, and saw the park, the walking paths, the pond…and a flock of just-landed Canada geese. (They were also looking for Fed Ex and had been given the same wrong address that I’d been. At least I was in good company.)

Postscript, December, 2013: I‘ve been told, and was not surprised to hear, that this Fed Ex location no longer exists. The real question is, did it ever exist, or did I actually have an experience nine months ago in The (real) Twilight Zone?