You are here: Home › Uncategorized › The Cone of Uncertainty 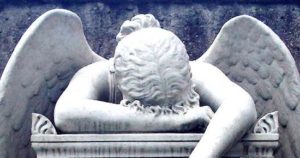 I had planned to post a piece with this title weeks ago–when the latest hurricane came through, as “cone of uncertainty” is a weather term, of which I had not been aware until a friend in another state emailed to ask if I was in the “cone of uncertainty”–the geographic area of vague that surrounds a hurricane and its path, no one knowing which path the storm will take.  I laughed at the dire sound of the term.  I wish I were laughing now.

With last week’s U.S. presidential election, it seems the entire planet is now in a massive Cone of Uncertainty, not knowing which way we are about to be led by this new president-elect who scares the thinking ones among us into varying degrees of terror. I, as with others I know, have been virtually comatose with the news and each time I think of something else that will be affected (destroyed), I just shake my head in continued disbelief.

Of course I know nothing is ever certain, even when it seems that way, so looking at it like that, nothing has ultimately changed–or has it?  What has changed for many of us is our perception and heightened awareness of the uncertainty that is our lives. Many are fearing for their lives–whether the fear is of being deported, having their marriages be decreed illegal, losing their health insurance, or losing life itself in the event the nuclear codes get utilized in a middle-of-the-night temper tantrum or tweet storm. And Americans are not the only ones paralyzed with what-ifs…the whole free world is right there with us. Two who are most likely gleeful at this turn of events are Vladimir Putin and Kim Jong Un, causing the fear in the rest of the thinking world to heighten.

Writing this seems trite. The whole debacle of this U.S. presidential election must have the authors of our Constitution spinning in their graves to the point that earthquakes threaten even more than usual. And that’s another thing–with the promised increased fracking, there will undoubtedly be many more of those in the flatlands, not previously prone. Say goodbye to our national parks and the wildlife within them–wildlife everywhere, for that matter.  All slated for doom and destruction. I feel like the Kardashians have taken over the country, and in fact, their equivalents have. Heaven help us.

Dizzy from my constant head shaking, I can only hope that the way it seems is not the way it really is, but this time the signs are all there that it truly is this way, and in this case, as bad as, it seems.

2 Responses to "The Cone of Uncertainty"